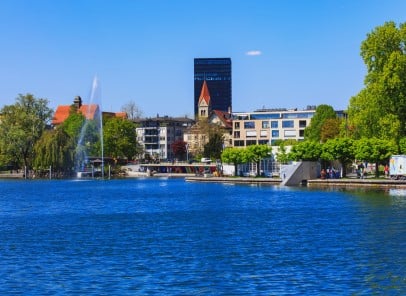 Steve Bannon is regarded as a close advisor to the acting US President Donald Trump. Recently, he gave a speech in Switzerland and spoke about the role of cryptocurrencies.

Switzerland is now a very important location for crypto currencies and for the development of these. The canton of Zug in particular is known for the fact that many companies operating in the field of cryptocurrencies have their headquarters here

According to Steve Bannon, cryptocurrencies are a kind of tool that can be a countermovement against the establishment. The media report on the speech in which Bannon believes that cryptourrencies can be used to deprive central banks of control. He is known above all for the fact that President Trump helped Trump to gain power, or supported him intensively. One of the aims of his Europe Journey is likely to be to gain an overview of the political flows and developments in the countries.

Why is Canton Zug so popular with crypto companies?

The Canton of Zug is best known for its low tax rates. As a result, 30,000 companies are currently based here. Anyone who takes a walk through Zug will soon realize that it is not only Swiss design but also a large number of office buildings. The place is more than known by crypto-traders and already now there is a speciality from official point of view. In Zug, the municipality officially accepts the cryptocurrency bitcoin. Those who have to pay fees at the registration office in Zug can pay them in Bitcoin. The invoices may not exceed CHF 200 in total. Whether this offer will be used intensively in practice is still questionable at present.

The Ethereum currency in particular is often under discussion in Zug. This is probably also due to the fact that Vitalik Buterin, the founder of the currency, lived and worked here in the meantime. Like the currency Bitcoin, Ethereum is based on the Blockchain technology, which is used to play through transactions in encrypted form.

How can I run a company in Switzerland as a foreign entrepreneur?

There is a possibility that the acquisition of a shelf company with a company domicile may pave the way for foreign entrepreneurs to do business in Switzerland.

We have specialised in acquiring and selling existing companies from Switzerland. For example, LTD’s and LLC’s (in Switerland names AG’s and GmbH’s) based in Switzerland are offered. The companies offered through us are 100% free of any debts. It should also be noted that the creditworthiness is excellent and the takeover can be settled quickly. As a result, the company is ready to do business in the shortest possible time.

A shelf company from the financial sector, a head office in Switzerland as well as a Swiss board of directors – you can get it all from us and jump straight to the crypto / ICO train –  get in contact with us now!

You can also take advantage of our domiciliation service. This ensures that a business address is provided for the company in Switzerland. There is the option to provide a c/o address, or your own address with a letterbox and a company name/logo. Possible locations in Switzerland include the cantons of Zurich and Lucerne, but also the canton of Zug, which is interesting for tax reasons, and other locations.

It is not only from a tax point of view that a company domicile in Switzerland is interesting. It is worth mentioning that, from a political point of view, Switzerland is considered to be extremely stable and has a very good infrastructure. It should also be mentioned that it is geographically very centrally located in Europe and is therefore easily accessible from many surrounding countries.